Our editors pick the products & services we write about. When you buy through our links, we may get a commission. Learn more.

If you do not have time for the details, here are our top picks for ACOG scopes:

If you want to improve your shooting speed, accuracy, and effective range, few optics come close to the performance of an ACOG (Advanced Combat Optical Gunsight). One of the most practical and proven optics to ever top a military rifle, ACOG scopes are known to perform under pressure.

Although initially developed for the battlefield, civilians can now choose the best ACOG scope for hunting, competition, and tactical shooting applications.

Not sure where to start? We’ll walk you through what to look for, answer some frequently asked questions, and share our top picks.

What is an ACOG scope?

ACOG is an acronym that stands for Advanced Combat Optical Gunsight. More specifically, ACOG is a line of telescopic sights manufactured by optics giant, Trijicon.

Although originally developed for the U.S. military’s M16 rifle and M4 carbine, today the ACOG line features optics that vary in size, magnification, and illumination power, making them useful for a variety of shooting endeavors. You can find a suitable ACOG to mount on anything from a .22 rimfire rifle to an AR-10 chambered in hard-hitting .338 Federal.

Trijicon manufactures 12 different ACOG variants. Although some ACOG models are battery powered, most feature a mixture of tritium and fiber optics that illuminate the reticle, making them suitable for use in bright sunshine or in low light shooting situations.

What to Consider When Buying an ACOG Scope

The most important factor in choosing an ACOG scope is how you plan to use your rifle. Let’s take a look at some of the key features to consider.

One of the best things about Trijicon’s ACOG scopes is their battery-free illumination. Most models utilize special fiber optics for reliable daytime illumination and tritium to illuminate the reticle after the sun goes down.

If you don’t want self-regulating illumination, the TA110 and TA02 models ditch the fiber optics and replace them with a battery-powered LED.

ACOGs feature one of five different reticle designs. Which one is “best” depends mostly on personal preference.

The basic reticle styles are:

You want to make sure the ACOG model you choose matches the caliber of your rifle. This is important to ensure the BDC hash marks of the reticle correspond to the ballistics of the rounds you’re shooting.

When you look at the reticle, you’ll see tiny numbers to the side of each mark. These points are references for BDC over distance. When shooting at long-range targets, you can use these numbers to make adjustments so your point of impact matches your point of aim.

This is where Trijicon’s ACOG models differ most. The number that comes first in the series (before the x) indicates the optic’s level of magnification.

All ACOG scopes are fixed power. This means they offer one magnification level and don’t allow you to zoom in or out on a target.

An ACOG scope with a lower magnification level is best for short to medium range shooting. Pick a higher power if you’ll be shooting targets at longer distances.

Eye relief is the distance you need between the optic and your eye to view the scope’s full image. You may need extra eye relief if you are using your scope on a high caliber weapon. The extra space will prevent you from being hit in the face due to recoil.

Let’s take a look at the top-rated ACOG scopes and what they do best.

While every scope in the Trijicon ACOG series is a true performer, this model has the best customer rating of all the models. With battery-free illumination, a rugged aluminum-alloy housing, and a “Both Eyes Open” design, the Trijicon TA11 is easily one of the best fast-acquisition optics on the market today.

Designed for rifles chambered in trendy .300 Blackout, this Trijicon ACOG features a unique reticle optimized for both supersonic and subsonic ammunition.

Trijicon manages to keep the reticle simple and uncluttered by merging aiming points. The TA02 has supersonic BDC marks out to 600 yards that coincide with subsonic BDC marks for shots out to 200 yards. This awesome feature allows shooters to switch seamlessly from supersonic to subsonic ammo without having to re-zero their optic.

This fixed 1.5x magnification riflescope is built like a tank. Nearly indestructible (just like the Kalashnikov rifle), the Trijicon TA44-C is built from forged 7075-T6 aircraft-grade aluminum alloy.

This model has a low housing height that facilitates the lowest possible mounting configuration. With a lower profile, the TA44 achieves a near perfect above-bore optic height for AK-47s and other firearms that require lower cheek welds.

Designed specifically for the M4 and M16, Trijicon’s TA31 has the distinction of being the first ever Rifle Combat Optic (RCO) of the United States Marine. This battle-proven optic features the Primary Arms patented ACSS reticle that provides accurate range estimation and BDC for standard 5.56 NATO out to 800 yards, making it perfect for your AR-15.

Like most of the optics in the ACOG line, the TA31 offers fixed 4x magnification and provides fast target acquisition with Bindon Aiming Concept (BAC), both-eyes-open shooting. This ACOG model offers 1.5 inches of eye relief, an expansive field of view (36.8 feet), and dual-illuminated fiber optic/tritium reticles for daytime and low-light operations.

It’s no secret that Trijicon ACOG optics are expensive. While we think they are well worth the monetary investment, we also understand they may be outside the price range of many shooters.

If you want the look and easy target acquisition of an ACOG, but don’t want to pay big bucks, try an ACOG clone. We love this one from Monstrum Tactical.

The Monstrum 3×30 Ultra-Compact Rifle Scope has a sleek modern design, rugged construction, and an illuminated rangefinder reticle. You can easily control reticle brightness in both red and green with multiple brightness intensities.

If you want the tactical feel of an ACOG for your .22LR AR, this clone from TACFUN is a great option. It has a tri-illuminated (red, green, blue) reticle that works well for intermediate distances, yet is fully capable of pulling double duty as a CQB reflex optic.

The housing is milled from a solid piece of aircraft grade aluminum. It is also nitrogen charged for fogproof, shock-resistant performance.

You also get a generous 3.5 inches of eye relief for target acquisition so fast and easy, it gives a true ACOG a serious run for the money.

If you’re trying to work within a budget, but still want a true ACOG, the TA45 is the most affordable model in the ACOG line-up. This one is rugged and reliable and has all the features you expect from a Trijicon ACOG, including battery-free illumination, “Both Eyes Open” shooting, and outstanding optical clarity.

This model has a simple crosshair reticle best-suited for rapid target acquisition on close-range targets. The TA45 also has a large exit pupil and long eye relief which provides extra freedom in eye position.

Although not technically an ACOG, this Miniature Rifle Optic (MRO) is a Trijicon. It comes combat-ready right out of the box and mounts easily to your rifle or shotgun.

A favorite of turkey hunters, the Trijicon MRO reflex sight features a 2 MOA red dot reticle that provides fast target acquisition as well as a precise aiming point. It has a large aperture and tapered light path to maximize the viewing area and preserve peripheral vision, especially from the awkward shooting positions often necessary during spring turkey season.

This optic has awesome clarity thanks to Trijicon’s advanced lens coatings. Made from hard anodized forged 7075-T6 aluminum, the Trijicon MRO is fully sealed and waterproof, making it one of the toughest reflex sights on the market.

With 6x magnification, the Trijicon TA648 is perfect for accomplishing extended-range shots with your AR-10. It is specially engineered to enhance target identification and increase hit probability by using an extra generous eye box.

The reticle features a red chevron center point and incorporates BDC marks estimated for the trajectory of the 7.62x51mm and .308 Winchester cartridges out to 1200 meters.

Like other members of the Trijicon ACOG line, the TA648 6×48 is battery free and waterproof to 328 feet.

What ACOG scope does the military use?

The United States Army, Air Force and Marine Corps use the Trijicon TA31RCO ACOG on their rifles. The Army designation for this optic is the M150 Rifle Combat Optic, while the Marines refer to the same scope as the AN/PVQ-31 Rifle Combat Optic.

United States Special Operations Forces utilize the Trijicon TA01NSN as part of their SOPMOD kit for the M4A1 carbine.

Which ACOG has the best eye relief?

Which ACOG model has the “best” eye relief largely depends on your application, type of weapon, and personal preference.

What’s so great about ACOG scopes?

Since ACOGs come with seriously expensive price tags, it’s easy to wonder if they are worth the financial investment. Here are just a few reasons why you should consider an ACOG scope.

Advanced Combat Optical Gunsight (ACOG) scopes are undoubtedly one of the most exciting modern developments in the shooting world. These optics are designed for rapid target acquisition of fast moving targets in close quarters situations, while also providing precision accuracy at longer ranges. Suitable for practically any shooting application, the best ACOG scope is just as suited for your hunting rifle as it is your combat weapon. 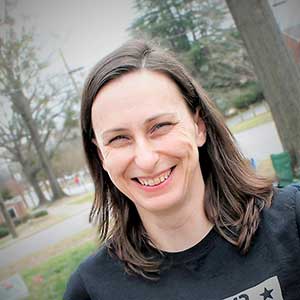 Alice Jones Webb is a writer, life-long hunter, experienced shooter, and mother of 4 up-and-coming shooting and outdoor enthusiasts. She grew up flinging arrows and bullets at Virginia whitetails, turkey, and game birds, but her favorite hunting experience is chasing bull elk in the Colorado backcountry.

Never one to sit still and look pretty, Alice is also a self-defense instructor and competitive archer. She currently resides in rural North Carolina with her children, non-hunting husband, and a well-stocked chest freezer.